Successful Cersaie for Caesar Caesar Ceramics, The unique ‘material culture’ that identifies us comes from more than 30 years experience and innovation in the field of high-quality Italian porcelain tile, a guarantee of comprehensive technical know-how.

Cersaie is over, its success is confirmed: at the end of what, for 39 editions now, has been the most eagerly awaited international event in the ceramics sector, Caesar looks back on its results with great positivity, celebrating the considerable appreciation shown by the many Italian and foreignvisitors who visited the Stand C28-D27 of the new Hall 37.

A space featuring renewed dynamics and concept, which welcomed customers and professionals from all over the world, combining art, technology, functionality and design in a playful dynamic: in fact, following the byword Let's Play, declined by Caesar for this edition, the Made-in-Italy porcelain stoneware of the company from Fiorano was able to determine its leading role in an eclectic and engaging way. Quality and functionality of the material demonstrated an extremely creative and versatile dimension, ideal for giving spaces the right style and a spirit suitable for welcoming with personality. 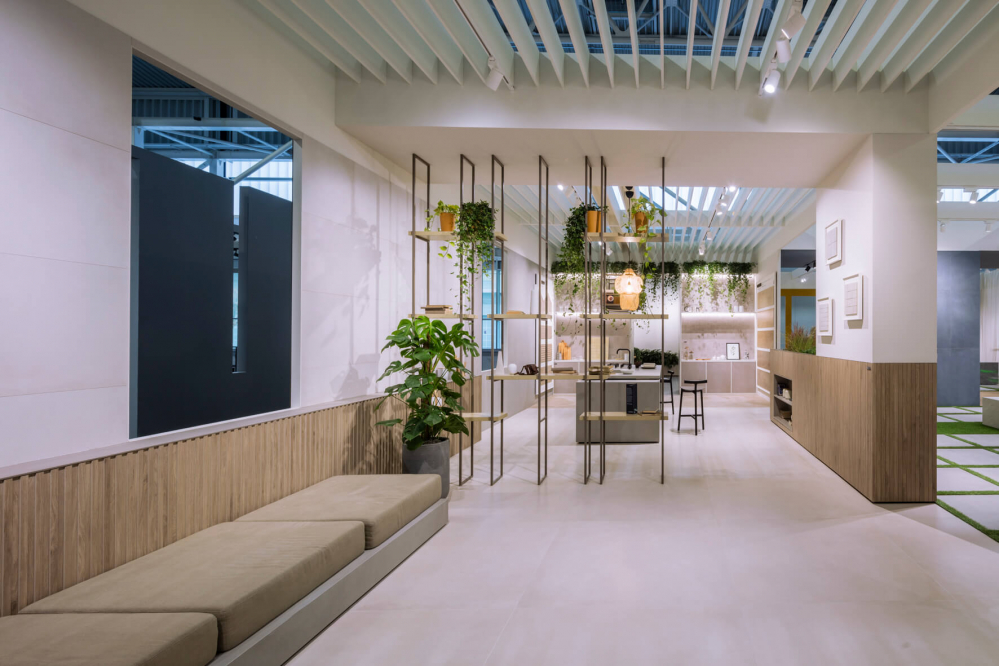 Many shapes, finishes, colours, textural inspirations and flexibility of final use represented Caesar's new series: starting with clay, the first material of ceramics that has defined the soul of Prima not by chance, offering full design freedom to contemporary environments; knots, veins and nuances, on the other hand, have been the characteristics of Cocoon, which has interpreted oak in a ceramic key, expressing into ideal solutions for both indoor and outdoor use. Caesar's increasingly versatile nature was then expressed in the Deco Solutions project, where a deployment of elegance and liveliness defined numerous decorations that matched the company's main porcelain stoneware series, fully interpreting the alliance between art and technique, between design furniture and architecture.

Among the novelties, Alchemy new LUX finish gave added prestige and personality to a recent and highly successful collection, which sought to explore metal in an unusual and therefore even more original way.

There was no lack of established Caesar series, such as Anima Futura and Key_Mood, both textural expressions of marble and stone, respectively. They represented Caesar material expertise put to constant research and development work for the definition of highly original and, at the same time, timeless styles.

The Aextra20 project dedicated to outdoor spaces follows this path, too: increasingly at the centre of design attention and social well-being, outdoor areas find in Aextra20 an excellent ally and a complete programme in both technically and aesthetically terms, with a wide range of solutions and finishes in continuous implementation. 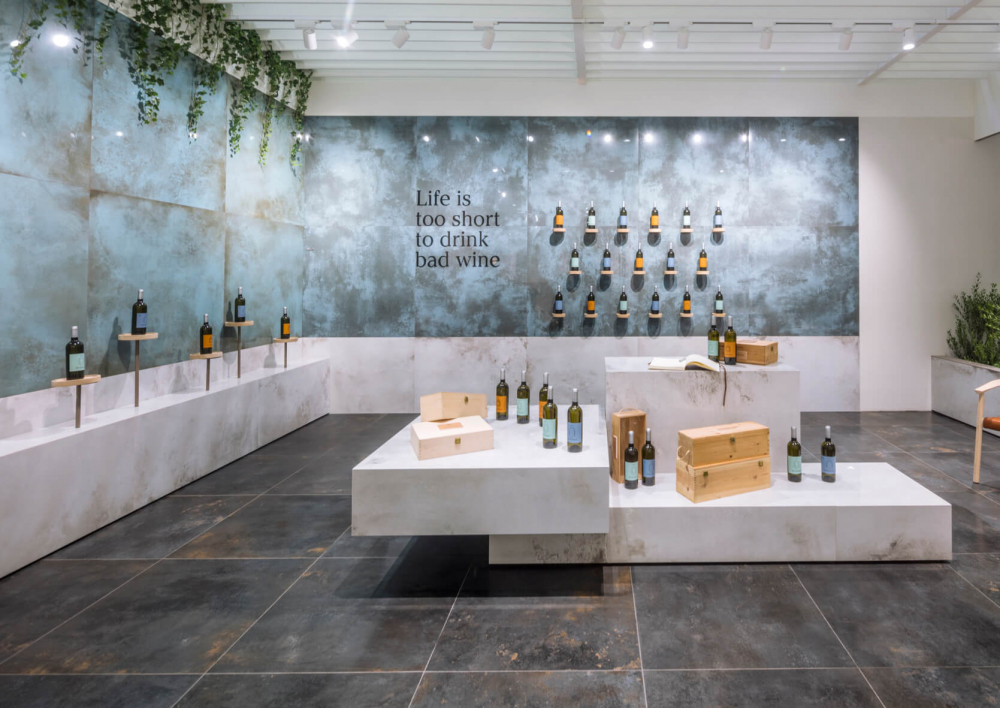 But Caesar's evolution is not limited to the production level and involves design all round: thus, the area dedicated to Virtual Room, the new generation configurator that entertained customers and visitors alike thanks to its digital technology, was also a great success at the stand. Through predefined settings or by uploading photos of their own spaces, Virtual Room left autonomy and creativity to the users, who were able to realistically clad the various settings, experimenting with different combinations of floor and wall tiles.

The common denominator of each thematic and project area was the sustainable aspect: a concept that is now indispensable, even more than necessary, that Caesar has always had among the leitmotifs of its industrial operations and that today it was further brought to the attention of its stakeholders with the Every Day Counts project. It is a true "belief" where the services and activities carried out by the company involve production as well as the people who represent it, aiming at the enhancement of social responsibility as well as the overall well-being of industry and mankind. 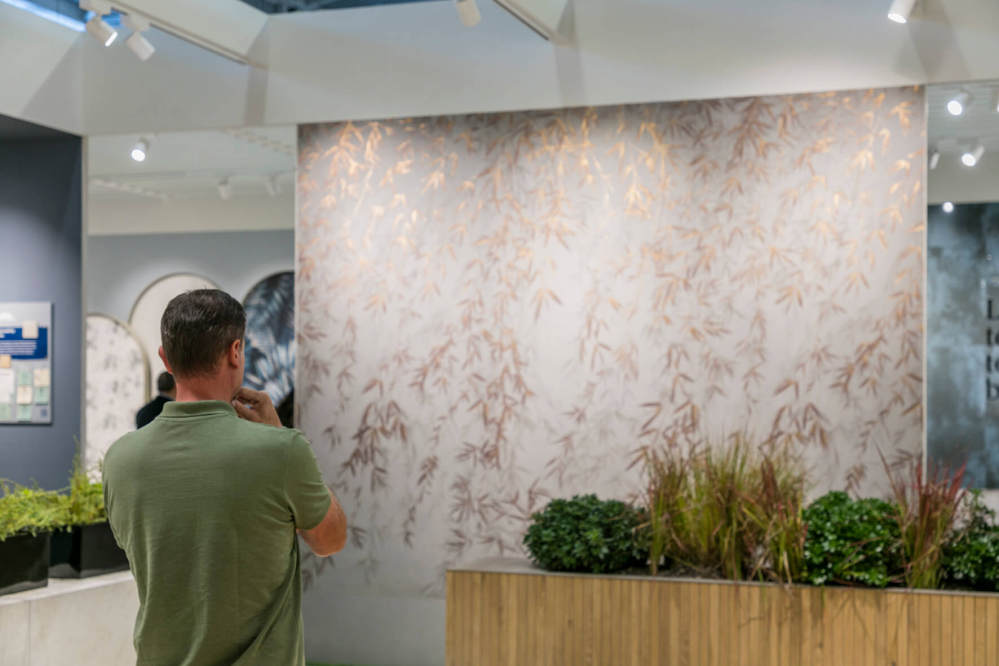 The event in Bologna then continued in the Caesar headquarters which, on Monday, Tuesday and Wednesday, welcomed its customers to the Fiorano showroom: an experience among the most prestigious collections and with the exclusive interactive Factory Tour among the most avant-garde technologies, concluding with an aperitif made in Caesar.

So Cersaie ends with a glance towards the near future with great drive, promising to translate the enthusiasm and appreciation of this exhibition event into new paths of innovation. 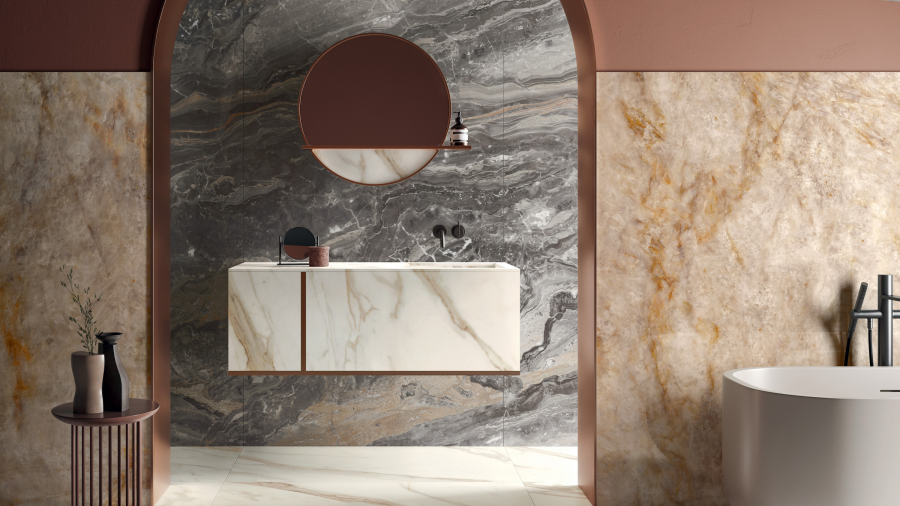 The marble look means timeless elegance: naturally at ease in contexts with strong reminders of the past, yet equally at home in contemporary settings.
With Anima Futura, Caesar porcelain stoneware lights up the radiant beauty of marble from an original perspective, suggesting a deeply trendy style with a keen eye on the future.

A charm-packed look for the 21st Century. 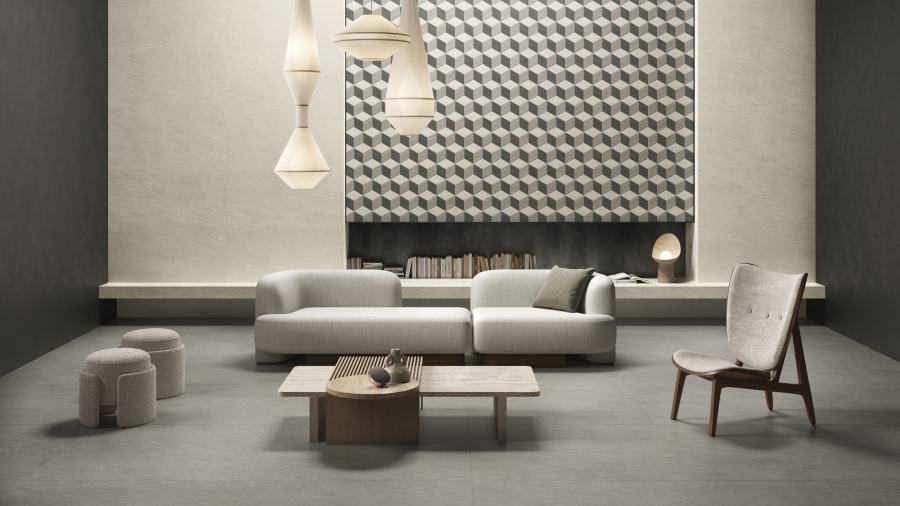 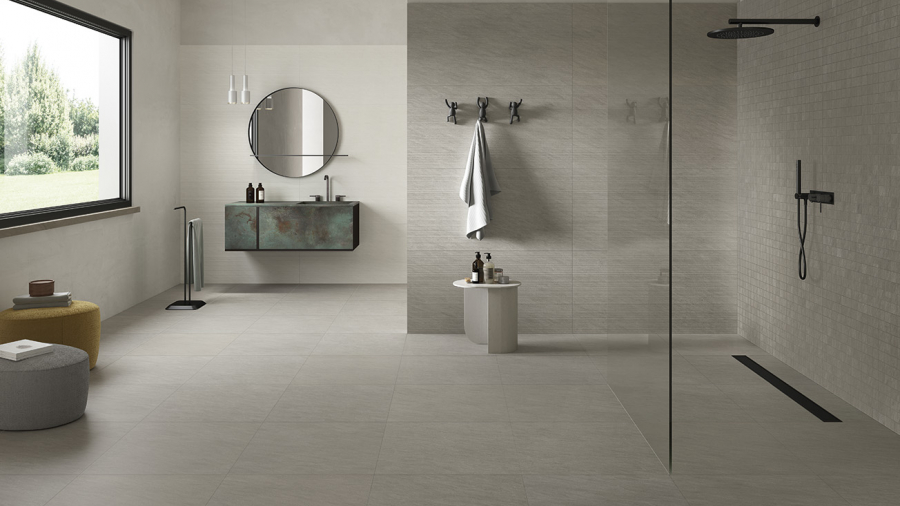 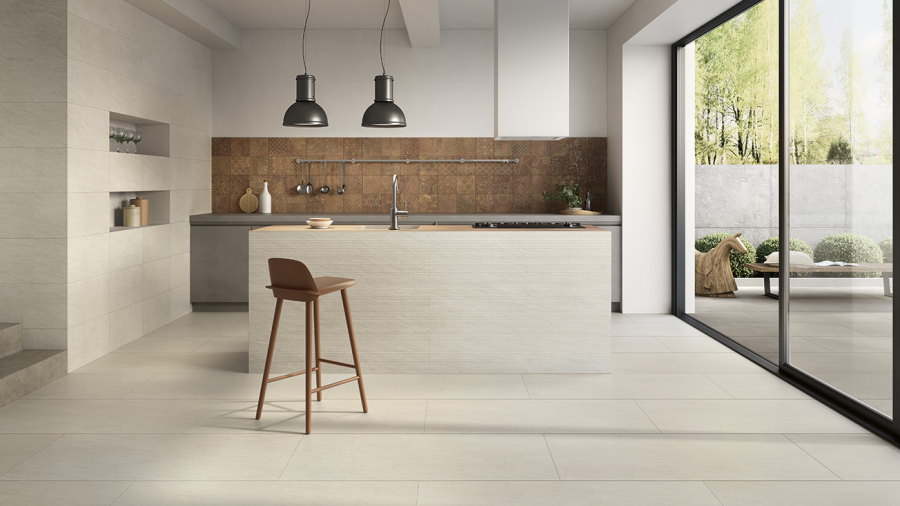 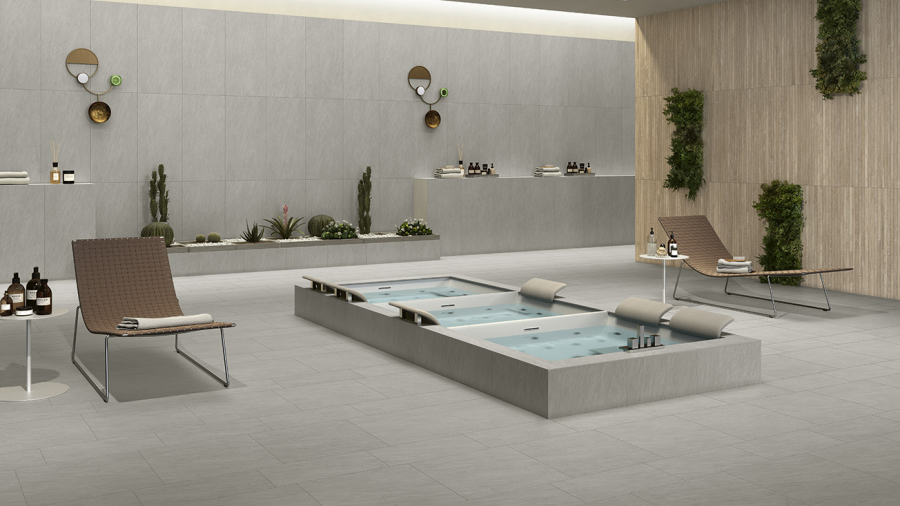 Key_mood draws its inspiration from a classic Italian stone, which is elemental and elegant, interpreting it with a modern and minimalist twist; this line of porcelain tiles takes man back to his essence, a
return to nature towards unprecedented style accomplishments.

The texture of the products stems from a profound synergy between styling and technique, between
an elegant look and contemporary style. 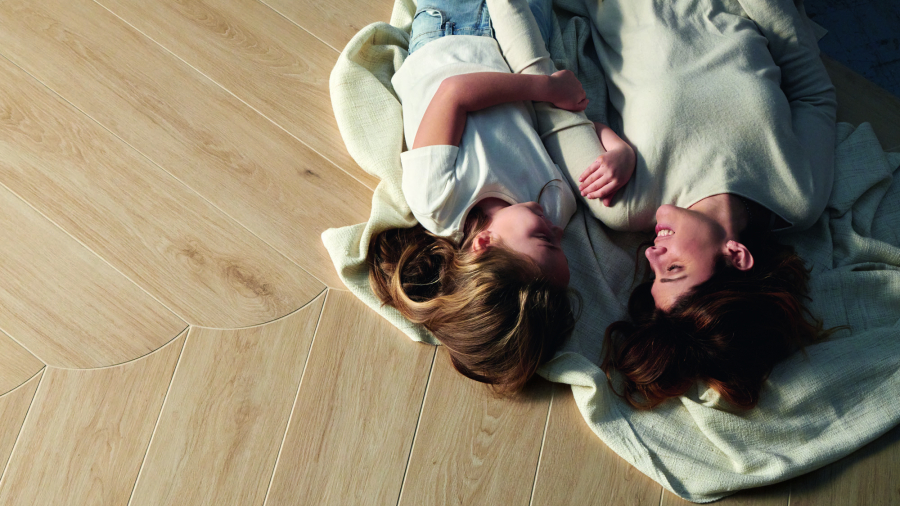 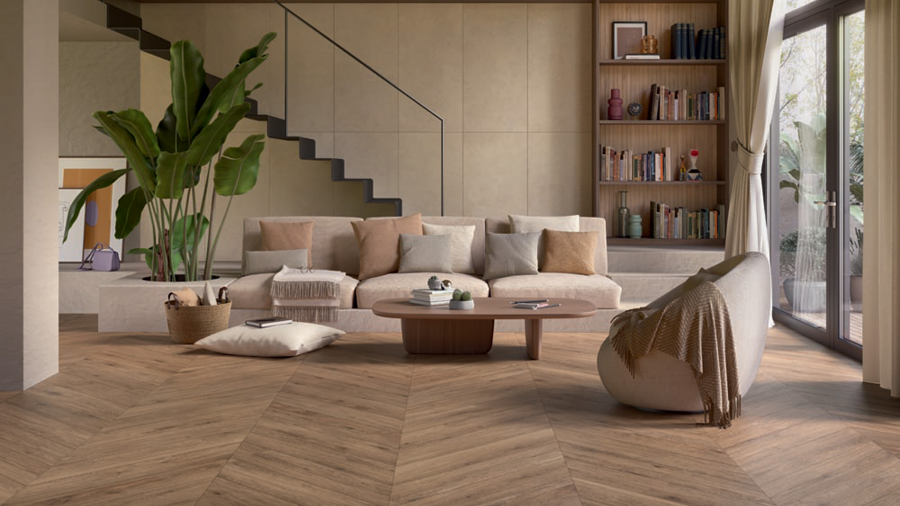 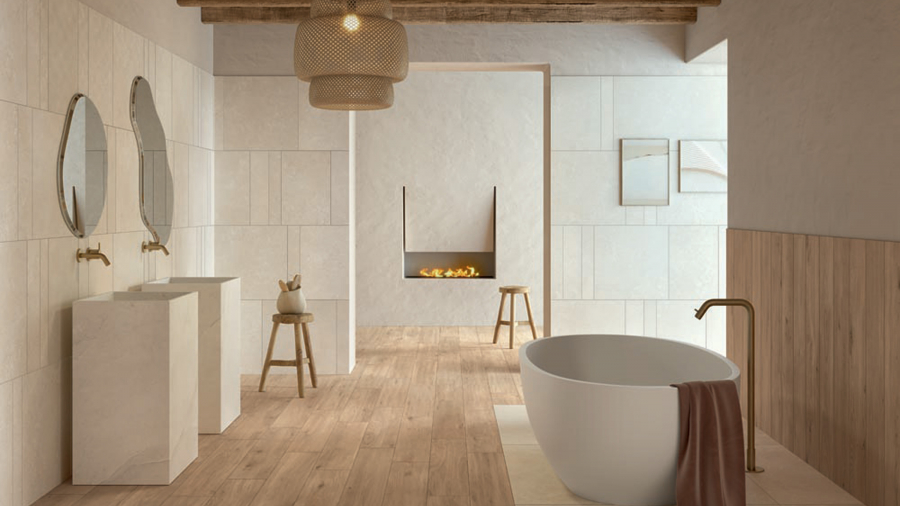 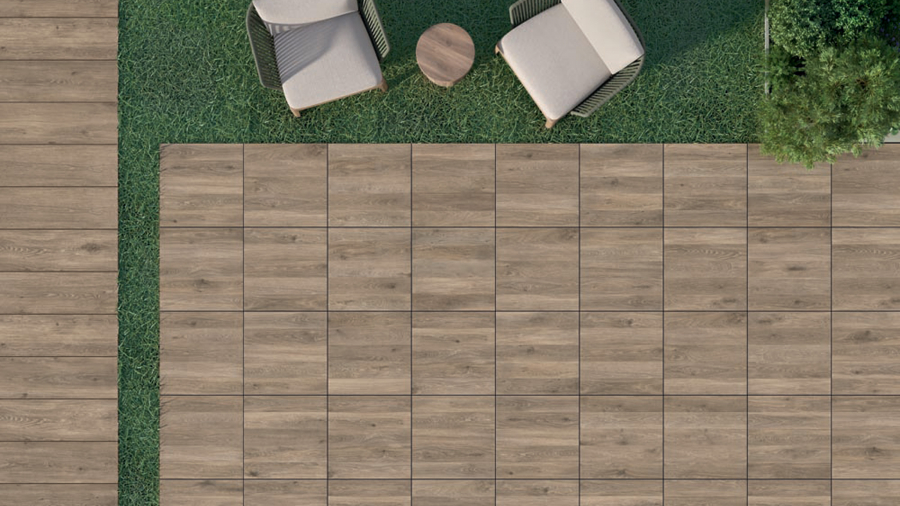 The look of one of the most precious types, to dress the home and other architectural spaces with warm and enveloping atmospheres.

Places to enjoy intense and fulfilling moments of everyday life, embraced by a natural and elegant, simple and contemporary design.

Cocoon is the ideal combination to fully express your emotions. 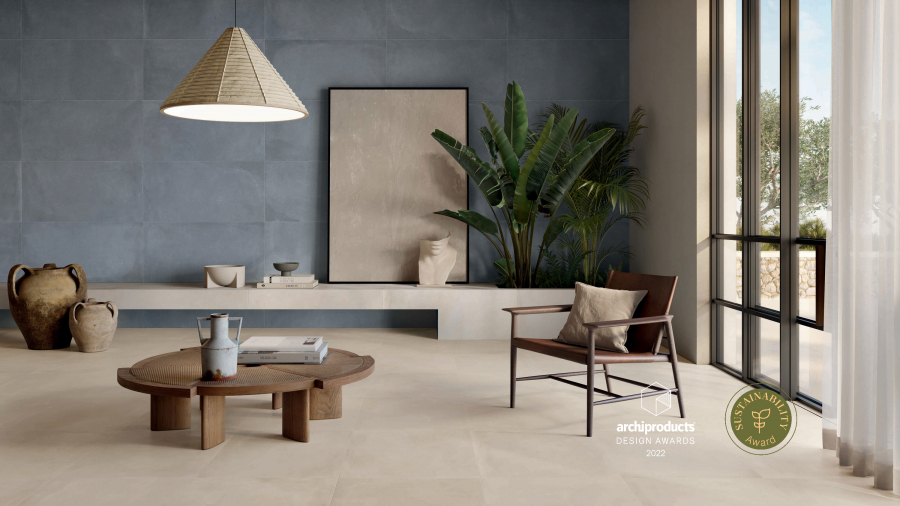 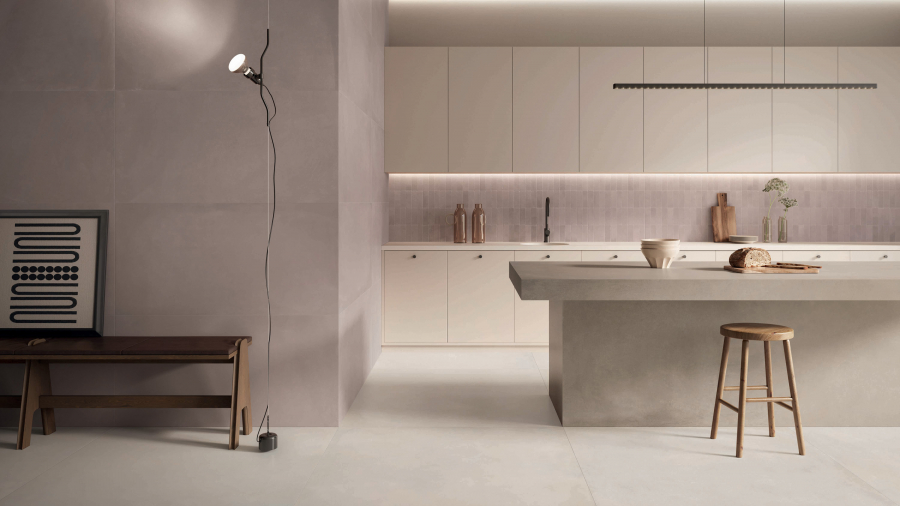 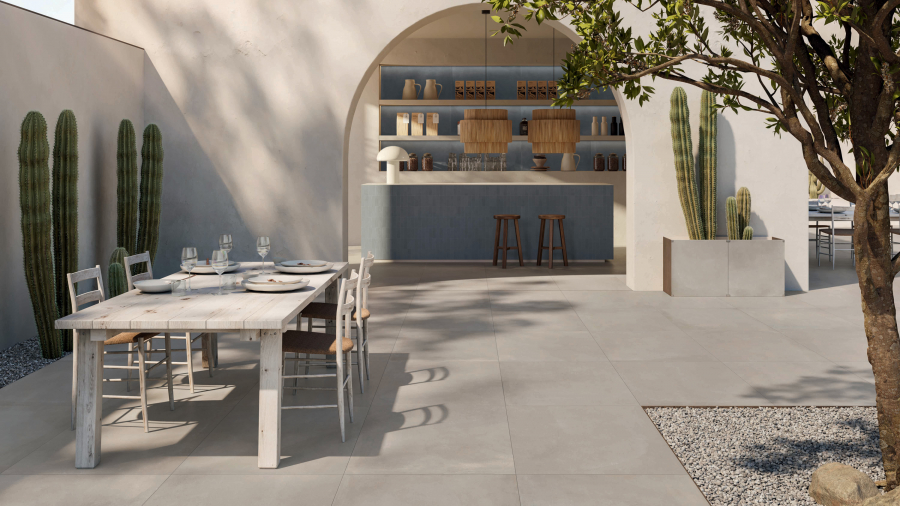 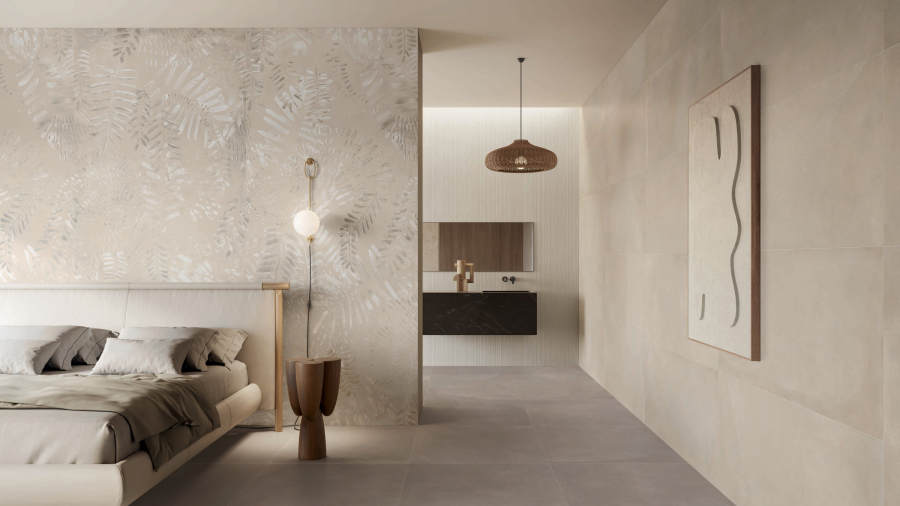 Prima is a reminder of the essentiality of clay, revisited with an appealing contemporary accent. A material conceived to design environments with an instinctive, yet contemporary comfort. 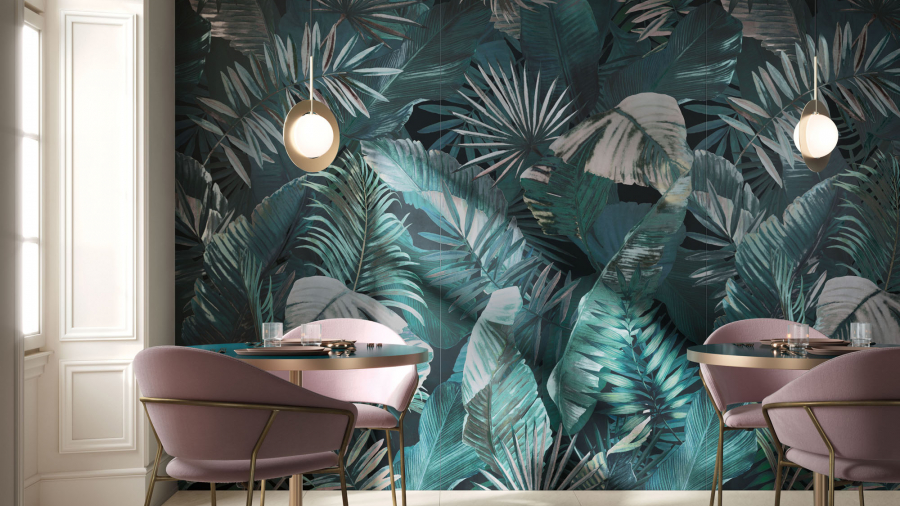 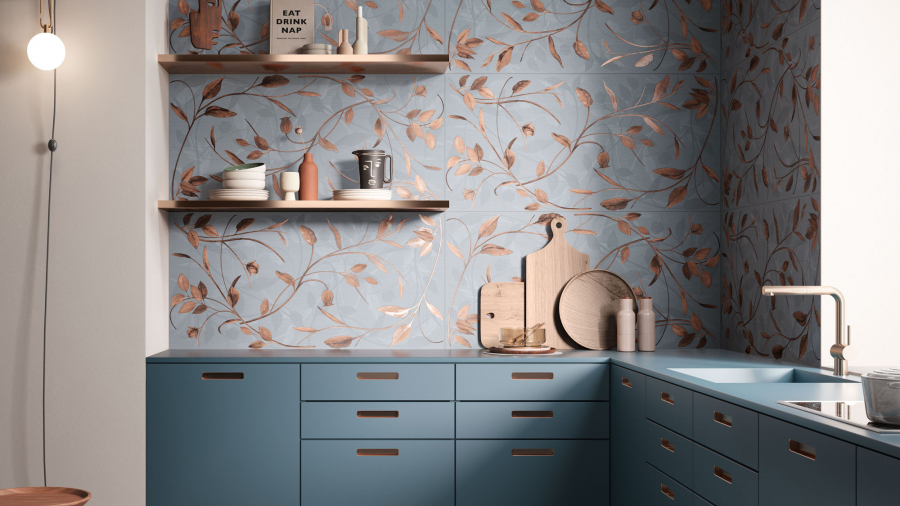 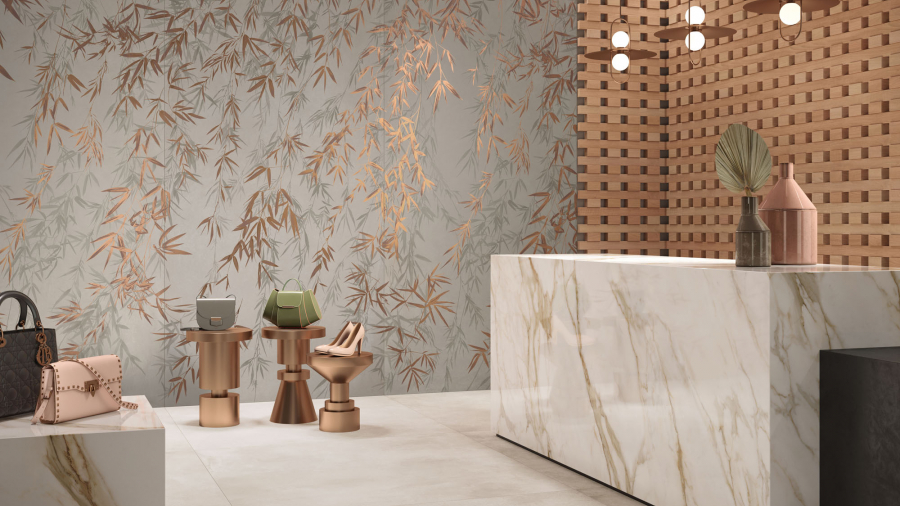 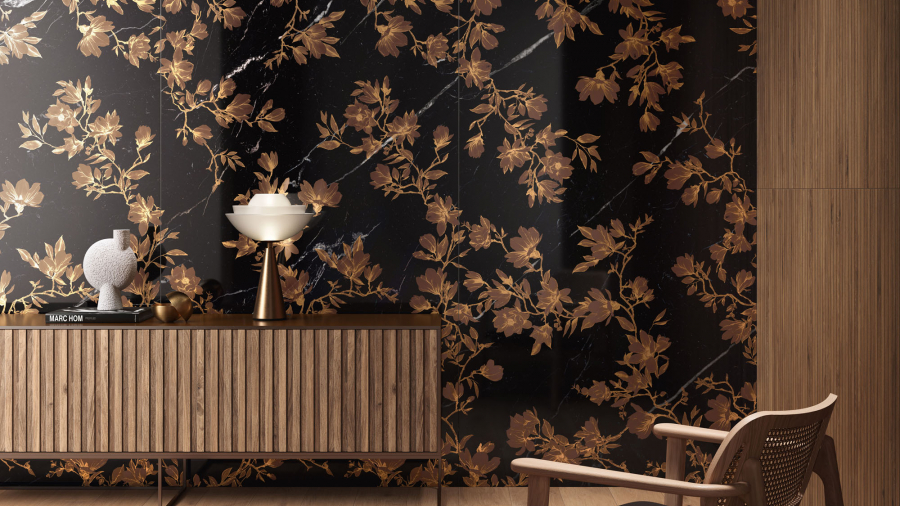 A wide offer of decorations in size 60x120 and 120x278, that can be combined with all Caesar collections.

Textures, colours and modular designs are available to characterise your architectural and interior design projects with style.

The journey through the New Caesar Gallery, the company showroom that Ceramiche Caesar has extended and renovated with the project of the architect Guglielmo Renzi, develops all around the headquarters of Fiorano Modenese. 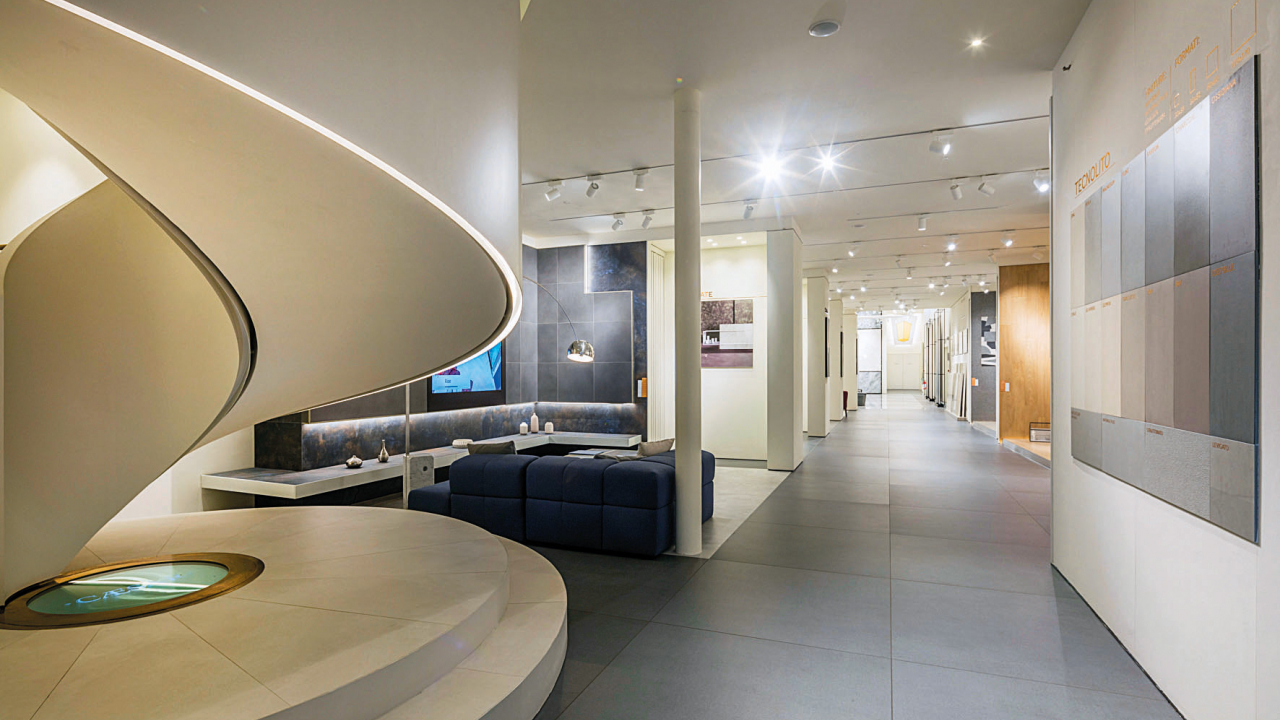