London's Skyline: how has it changed and how is it going to change again Caesar Ceramics, The unique ‘material culture’ that identifies us comes from more than 30 years experience and innovation in the field of high-quality Italian porcelain tile, a guarantee of comprehensive technical know-how.

London's Skyline: how has it changed and how is it going to change again

“I’ve been walking about London for the last thirty years, and I find something fresh in it every day”.

This is how Walter Besant described London in 1896. A city with a thousand souls, contrasts and stories, always different, changing with the point of view of whoever looks at it. The aphorism is just as true now, for a city whose stylistic contradictions and architectural evolution will make any visitor fall in love with its many surprising perspectives.

Caesar has played a pioneering role in this trendsetting city, aiming to capture its urban transformations and changes and translate them into cutting edge ceramic products. Since 2007 the Fiorano company has set down its roots in the British capital, first with the Design Center, a meeting point located in Covent Garden; then, in 2015, with the inauguration of its first ceramics showroom in London: the Urban Lab, located in the heart of the Clerkenwell design district, soon became a point of reference for designers and materials.

But how has the London skyline changed over the last 15 years?

The best way to see these changes and understand the nuances of this city that never sleeps is to see it from above. To see a landscape from above is to draw new horizons where others can only trace borders.

And it is precisely from this privileged perspective that the London skyline appears deeply changed, with new buildings staking their claim to modernity in a city in which tradition is the ever present leitmotiv.

Just a few minutes from Covent Garden, Trafalgar Square and the Parliament, on the other side of the Thames, the South Bank is London's creative and cultural district. Rebuilt after the bombings of the Second World War, it now houses the country's prime art and culture centres, a dynamic community and admirable examples of architecture like the Shard, Renzo Piano's splinter-like building which soars almost 310 m over the city, and the celebrated London Eye, the highest panoramic wheel in the world. 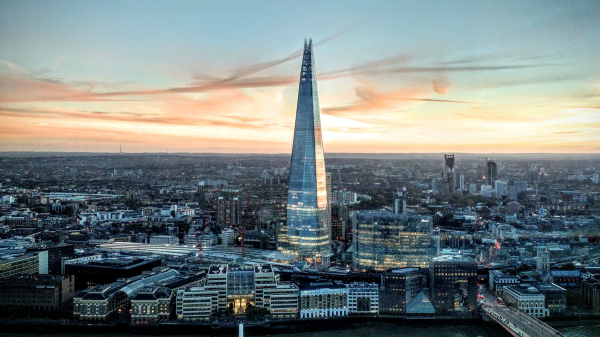 The Shard at sunset

In this business city par excellence, it is the skyscrapers that make the skyline a symbol of the life of London. Over the last 15 years, the South Bank has seen the birth of two extraordinary new buildings: the Leadenhall Building, better known as The Cheesegrater, and 20 Fenchurch Street (The Walkie Talkie).

225 m tall and unmistakably shaped like the cheesegrater that has given it its nickname, the Leadenhall Building offers the best balance of culture and economy, combining a view over the dome of Saint Paul's to the west with flexible office space.

One step lower, "just" 160 m tall, 20 Fenchurch Street - nicknamed the Walkie Talkie thanks to its concave shape - is a distinctive feature of the contemporary London skyline. Standing out for its unique form, it emphasises its link with the surrounding architecture and the Thames with its delightful Sky Garden, an internal amphitheatre on the 36th floor, the third from the top of the building.

With its social and architectural evolution, the South Bank fully represents one of the central elements of the on-going transformation of London, which is uniting the areas south of the Thames, traditionally lower class, with the capital's business and cultural life.

And it is precisely to the south-east that we find the Greenwich Peninsula which, over the last decade, has undergone one of the most far-reaching urban revolutions of all. In 2004, permits were issued for the large scale upgrading of the entire site, redrawing its skyline with over 10,000 new homes, 330,000 sq.m. of office space and the conversion of the Millennium Dome into a covered arena, now called the The O2, which was used for the London Olympics in 2012.

What will the London skyline look like in the future?

To describe London as a city that never stands still is a historic cliché, and yet it is essential to understanding the city and its future. From the Art Deco factories of Twenties to the skyscraper boom of the 21st century, London's architecture expresses the energy of a city with a great history driving towards the future, with utopian and yet realistic projects which make it possible to find your way through the urban labyrinth of London, recognising the impetuous charm of the capital of design.

Over the next 5 years, a number of innovations will change the capital's skyline yet again.

Imagine a building twice as high as Big Ben: this is Spire London, a 235 m building that should have been completed in 2020 but the construction of which is currently paused. Designed like a ship ready to sail the Thames, it will house a gym, a spa, a cinema, and a luxury hotel and restaurants, and will be the highest residential building in Western Europe.

The second highest skyscraper - and not just in London - will be the building already known as The Trellis, located at 1, Undershaft, whose gallery, with the highest ceiling in the UK, will compete with the renowned Shard.

This prized position as the second building after the Shard was almost taken from it by The Tulip, the widely used nickname for a building shaped like a tulip bulb, but whose design was recently rejected by the local government. Standing 305 m high, The Tulip aimed to revolutionise the London skyline with its innovative architectural design, and would also have stood out for two other reasons: rather than a typical business building, it would have been an exclusively cultural centre, featuring a large public park at its base.

The London skyline is an example for designers who want to integrate their work into the most challenging projects: to fit harmoniously into a setting with numerous architectural innovations while still making an original statement.

Caesar accepts this architectural challenge, offering designers and architects the specialised competencies of the Urban Lab and its local team of professionals. Urban Lab creates synergies between the best designers, companies, resellers and professionals to develop custom solutions for any construction project, from residential to contract.

Our showroom during the last Clerkenwell Design Week

A vast range of products, combinations designed & made in Italy, and constant attention to the latest stylistic trends: this is what has enabled Caesar to consolidate its position in the British design district. To confirm the widespread appreciation of the Fiorano Modense company's ideas and ceramic solutions, the constant stream of visitors to the showroom reaches its peak during Clerkenwell Design Week, the leading design event of which Caesar has been a protagonist since 2016.

Located on Great Sutton Street in the heart of the Clerkenwell district, a real hub for architectural study and a centre for global creative research, the Caesar Urban Lab positions itself as a point of reference for designers and material selection experts who are interested in developing the potential of porcelain tile in their projects. 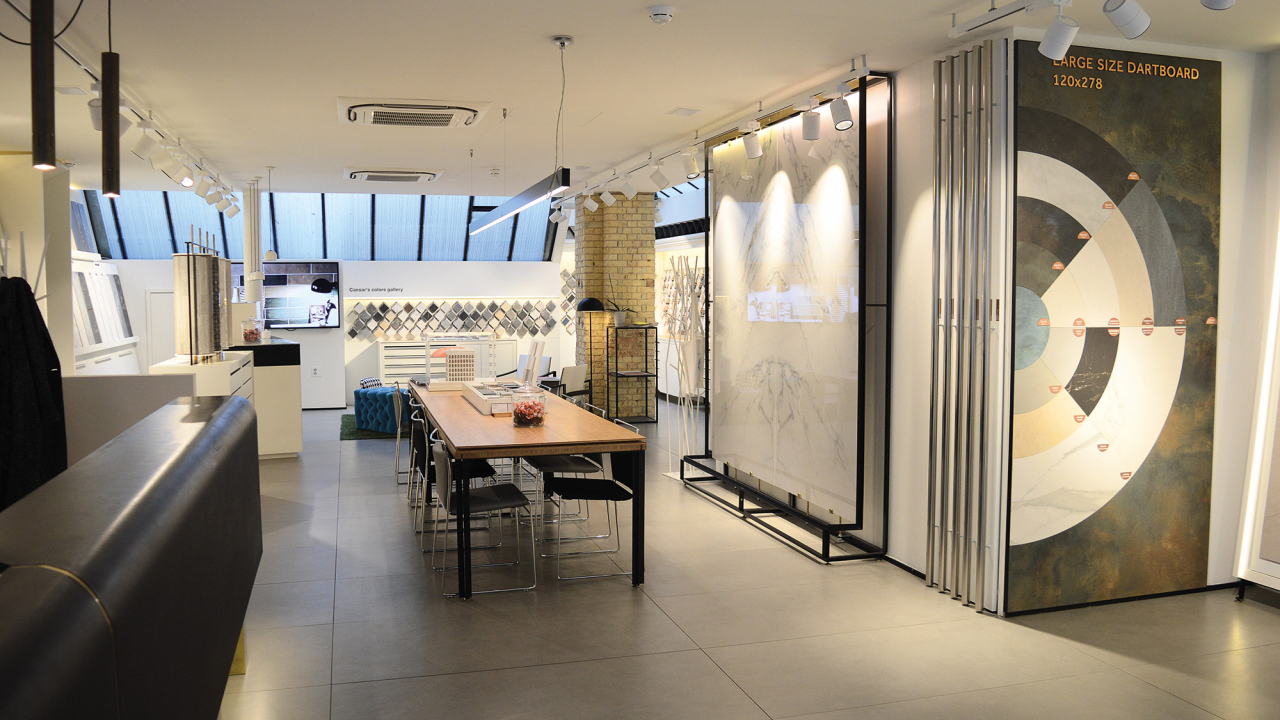 From London, the 2020 trends in the hotel industry
2020 trends for outdoor design